We use cookies to enhance your experience. By continuing to visit this site you agree to our use of cookies. | More info | Accept 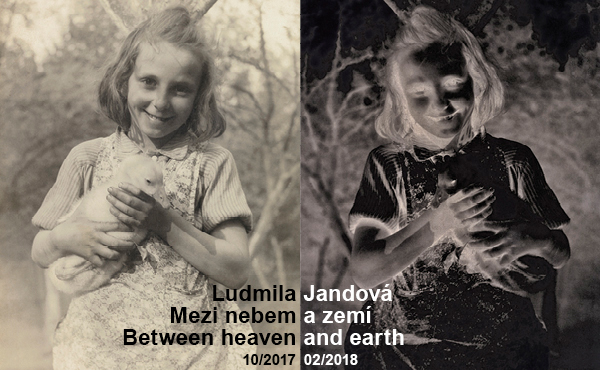 The painter Ludmila Jandová dedicated her entire life to painting, drawing, graphic works, collages and sculptures.  The range of her work is extensive and thematically diverse.  Often the topics addressed intertwine with one another.  The plots of individual pieces evoke other content levels that deserve a philosophical discourse.  These interconnections reflect the fact that the author worked in cycles, in which she subsequently changed, supplemented and expanded her individual themes, often “ad absurdum”.  Her work is feminine, intellectual, spiritual, but above all always topical.

The exhibition in Museum Montanelli cannot by any means accommodate any comprehensive selection of her entire oeuvre.  With the aid of her separate creative cycles the concept of the exhibition itself becomes no less than an attempt at a partial insight into the work of this exceptional painter and woman.

In the upper part and first room of the museum we find works from her particularly important creative periods.  These include her early work, influenced by the painterly styles which, after the Second World War, she tried to build onto pre-war modernist works, as well as landscapes and portraits influenced by her academic studies.  However, from the author’s style, it is already possible here to discern in which direction she was searching for her future role and artistic mission.

It is clearly man and his place in the world, human society, the environment of home and traditional values, nature that surrounds and nourishes us and, at the same time, the animal kingdom which Ludmila Jandová linked with human society.

In the second room works from the cycles in which Ludmila Jandová found her artistic expression, mission and style are exhibited.  In the graphic pages she depicts with great skill swarms of humanity that move into a limited and cramped space, into cages, whence there is neither escape nor explanation (the cycle Omezené prostory / Limited Spaces (1968 – 1973)).

Whether the author is discussing the fate of individuals and groups in the totalitarian regime in which she lived, or the collective trauma of the Second World War, is not entirely clear, but both may well be part of her eternal theme.  She is seeking solutions to the human destinies of those condemned to migrate from anywhere to whersoever, she offers ladders by which crowds of people may escape, climb walls and liberate themselves or unleash themselves and soar away into outer space (the cycle Žebříky / Ladders (1969 – 1975)).

Other ensuing cycles are displayed in all directions on the way round the museum.  In the upper part Zvířecí rodina / Animal Family (1965 – 1967), Ohrožení / Threats (1971 – 1972) and Útěky / Escapes (1962 – 1972) can be found.  These themes are often repeatedly interconnected.  The author works almost compulsively and with mathematical precision.  She draws groups of people and animals down to an almost illegibly small size, inserting them into a variety of formats and mutual relationships and forms.  It is not possible to read or enumerate who escapes from whom, whether animals and humans flee together or else the people are running ahead away from  the animals, often both, often by mutual consent or by sharing the same fate.  Sometimes they form all together a collective unit, one single cluster, a centrifugal swirl, a living mass.

In many settings a ubiquitous threat to life is perceptible.  The exception comes in the form of the cycle Zvířecí Rodina / Animal Family (1965 – 1967) in the lower right-hand section of the museum.   There, powered by her tenderness and professional gesture, she lays up and nests the young, placing them in the bosom of loving mothers or into the collective care of the animal kingdom.  She works with colour only in moderation, the majority of her folios are predominantly black, in general the colours are restrained.  The content mirrors the higher principles that affect the course of life.  In this manner she opens up the religious or spiritual theme, which is for her a typical and constantly returning source of her own creative inspiration.

The areas of the cafeteria and the outdoor show-case displays are taken up by thematically more relaxed works, oil on canvas or a variety of female nudes.  The cellar section of the museum is the part dedicated to her important creative period, the cycles Hroby / Graves (1972 – 1975), Množství / Quantity (1970 – 1974) and Lidé v čase / People in Time (1965 – 1970), expressing the gloomiest of life’s moments.  Withal she points out the ever-lurking danger of manipulation by the powers that be through totalitarianism and the warring potential and thus the threat of the destruction of humanity.

Since, in the times of social and political danger, Ludmila Jandová returned to the safe haven of her native village, Osík near Litomyšl, and since, thanks to the Janda family, the original layout of her studio managed to be preserved, this studio has been recreated in the lower part of the museum and includes items, requisites and her favourite artefacts with which Ludmila Jandová surrounded herself and incorporated in her work.  As with her whole creative life, likewise,  her studio is permeated with a secret and positive energy.  Through the austere lighting of the exhibits the studio with its multi-media view from the window in Osík radiates with the tranquillity and light that pervaded the entirety of her universe.

She did not perceive the world and her personal mission within it as a challenge, but as a God-given, unmistakeable being, with whom she identified herself and which had become a component of her faith.  She was constantly in search of new artistic forms and even accepted those gloomy, inevitable moments as an axiomatic element of her life.

“All are my children.  Not one of my pictures is without content, there has always been a matter of light or a course headed upward or to a certain depth of space, depth of thought….”
Ludmila Jandová on her work

From the White Gallery collection

Opening of the exhibition: Ludmila Jandová – Between Heaven and Earth

The last chance to see the the exhibition is on 18th February 2018.

News to your email

Do you want to be informed about new exhibitions
and events of Museum Montanelli?
Subscribe to our newsletter!